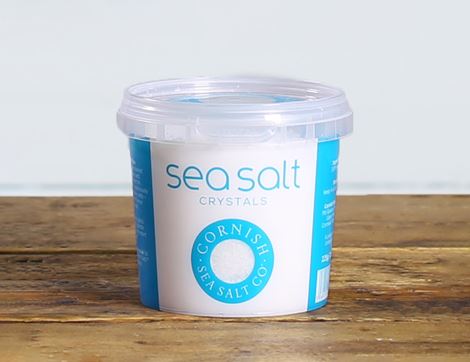 You can taste the ocean in these white crystals which are hand-harvested from Cornwall's Lizard Peninsula. The salt contains more than 60 natural trace elements, delivering more taste for less salt, making it a healthier alternative to table salt.
Read More Read Less
Producer

The Cornish Sea Salt Company harvests salt direclty from the ocean. It's run by Tony Fraser who settled on the Lizard Peninsula in Cornwall a few years back. He soon discovered an old Iron Age salt works just on his doorstep. The idea of bringing this industry back to life has become his passion. The last time sea salt was harvested in Cornwall was over a hundred years ago, in Mousehole. Tony brought in Scottish engineers, from sophisticated whisky distilleries, to help him sort out the harvesting plant, which is literally right on the sea. They've developed a system that converts sea water into salt, using steam evaporation. The end result is one of the purest sea salts to ever tickle your tastebuds.

Sprinkle this over almost anything and you'll instantly reap the benefit. Be careful not to use too much though as a healthy diet is all about getting the balance right! Store in a cool dry place. Not suitable for home freezing.