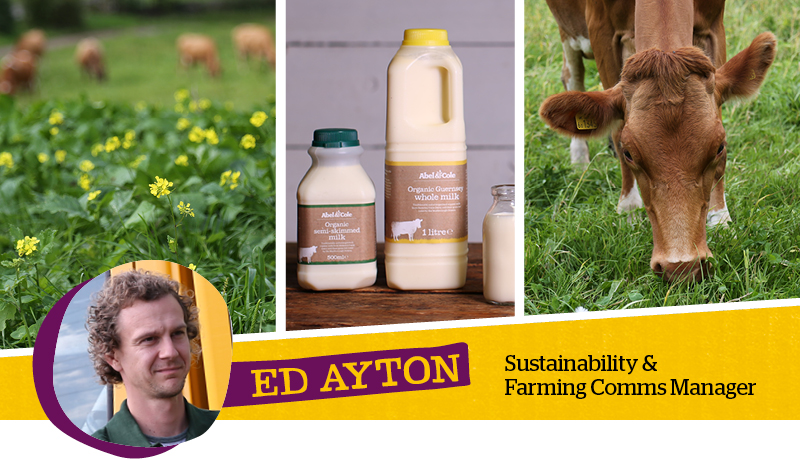 What is organic cow’s milk? How is it different from the conventional, non-organic kind? They might seem much the same as they fill your breakfast bowls, but there’s more to organic dairy than meets the eye. But is organic milk better? For answers, we spoke to someone who’s passionate about organic farming practices, our Sustainability & Farming Comms Manager, Ed.

Is organic milk better than non-organic?

This question is usually asked with nutrition and health claims in mind, an area where answers are rarely the ‘yes’ or ‘no’ kind. However, we’re committed to being as transparent and informative as we can be with organic, so we asked Ed to explain why we can’t give an easy answer.

“I’m often asked if organic milk is healthier than non-organic, and never have a short answer. I should be able to say “yes”, but when it comes to promoting the nutritional benefits of food, there are strict rules that must be followed to keep the public protected from misleading claims. We know organic milk contains up to 50% more omega-3s than non-organic but this is only found in the fat content, and in the grand scheme of our entire diets this would only increase our intake by 1.5%, too small to be officially ‘nutritionally relevant’.”

So, instead of thinking solely in terms of nutrition, let’s consider the myriad of other ways in which organic milk goes above and beyond, benefitting our animals and our planet.

How is organic milk made?

Organic and non-organic dairies share the same basic process of tending, feeding and milking livestock, but the principles and practices of these approaches vary greatly. Conventional, non-organic dairies often prioritise productivity, keeping their herds in small pens and providing their cows with a homogenous feed mix engineered for consistent milk production. This approach puts profits ahead of everything else, including the cow’s lifespan. Typically, a cow reared for conventional milk production lives to around four-five years, which is just a fraction of their natural lifespan.

On organic farms, animal welfare is the top priority. In fact, the Soil Association’s animal welfare standards are the highest of any farming system in the UK. A perfect example of this unmatched care and respect can be found on Brown Cow Organics’ Perridge Farm. Farm owners, Judith and Clive Freane put their Guernsey cows’ health and welfare first, sacrificing output to make sure the herd is happy. In a recent chat with Ed, Judith explained: “The herd is only milked once a day. We feed them only grass, but in those grass swards (a small expanse of grass), there are at least 18 species of grass, herbs and clovers. They have a hugely diverse diet within that. They walk to the fields to eat grass for nine months of the year and because they’re not pushed beyond their natural ability to produce milk, they live for many years. The average life of a dairy cow is about four years. Ours live to around 12 to 14 years.”

Grazing on rich, organic pasture makes a considerable difference to the cows’ health and welfare, but the effects go far beyond the herd itself.

Is organic milk better for the environment?

Declining biodiversity and rising carbon emissions are two challenges facing the world right now, and organic farming is an important part of tackling both issues.

Take Brown Cows’ pasture for example, with its 18 different species of plant. Encouraging such a diverse range of grasses, herbs and wildflowers creates a consistent source of food for pollinators, with different species growing and blooming throughout the year. The spread of flowering plants on organic farms is much higher than on conventional farms, with 50% more bees, butterflies and other pollinators found on organic farms on average. Large stretches of wild, organic pasture also serve as excellent carbon sinks. The wildflowers and herbs out in the fields not only absorb carbon as they grow, but trap and bury it when the cows move in to graze. The remaining shoots and roots are trampled under hoof, feeding nutrients back into the soil and enriching the land for generations to come.

There’s plenty of good in the less glamorous end of dairy production too: cow pats. It’s an overlooked aspect of organic dairy, according to Ed. “Cow pats include a huge concentration of nutrients, and they’re a particularly fertile spot for the UK’s 60 dung beetle species to get stuck into. Our dung beetles don’t roll manure into balls as they do in warmer countries, they tunnel down into the ground, taking the nutrient-rich dung with them. On an organic farm, where synthetic pesticides are banned under organic law, you’re more likely to see larger populations of dung beetles regenerating the topsoil.” A study conducted into these innocuous insects actually discovered that dung beetles saved the UK’s cattle farming industry an estimated £367 million a year through enriching the ecosystem.

Do organic dairies use antibiotics?

Using preventative medicine with a herd is a common practice in conventional, non-organic dairy farming but the overuse of antibiotics has downsides. The continued and consistent use of antibiotics can increase the antimicrobial resistance of bacteria in cattle, which makes treatments less effective in the long run. This in turn creates a greater reliance on medicine to keep the cows healthy, causing a cycle that organic farming tries to avoid. In line with the Soil Association’s organic standards, any animal livestock “must not be routinely given antibiotics.” Instead of administering medicine on a preventative basis, organic dairies protect their herds’ health with better access to the outdoors and a healthy, varied diet. All these factors can help to lower stress levels and the risk of disease, meaning there’s less reliance on synthetic medicine to keep a herd healthy.

Berkeley Farm in Wiltshire is one of our top dairies, famous for the golden colour of their organic milk and butter. Farm owners, Nick and Christine Gosling cultivate organic crops for their cows to feed on, but also use homegrown remedies to bolster their herd’s resistance to disease. “My preferred method of prevention and treatment of illnesses is homoeopathy,” says Christine. “I believe that homoeopathy is a logical and honest way of preventing and treating illnesses and injuries. I have witnessed many amazing results from using it for mastitis, calving difficulties, infertility, injuries and behavioural or emotional problems. I do respect the use of conventional medicines in life or death situations, but I believe that homoeopathy offers a gentler, less invasive treatment that treats the whole cow and the cause of the illness, rather than just removing the symptoms.”

Christine attentively looks after the cows every time they’re milked, giving them a health check-up, assessing symptoms and applying her herbal infusions when needed. With this level of care, every cow is seen as an individual with varying needs and requirements, and given the bespoke treatment it needs to enjoy a healthy life on the farm. Berkeley Farm’s organic Guernsey Milk practically glows with a golden colour, and we like to think that it shines all the brighter with a happy herd behind it.

Who are the top organic milk brands?

We’ve been an organic business for over 30 years, working with incredible dairies who have shared our passion for organic principles. Here are a few of our favourites and the dairy stars that make them so special.

Nick and Christine Gosling produce our golden, organic milk from their much-loved herd of Guernseys. They graze in wildflower meadows and on the greenest of grass in the same Wiltshire valley where Nick's father and grandfather raised their cattle.

The Goslings have spent considerable time learning all about cow psychology and treating bovine illnesses with natural homeopathic solutions. While Nick handles the arable side of things, growing nutritious crops to feed the cows, Christine is in charge of milking. The herd is milked at 4.30am and 3.30pm, and it takes Christine about two hours to get through their 120-strong herd.

The majority of our fantastic milk varieties come courtesy of Berkeley Farm, but their Guernsey Milk stands out as something special. Berkeley’s Guernsey cows produce a rich, unhomogenised milk that contains a higher count of the A2 protein than other dairy cows. It has been a winner of the Best Organic Dairy Product Award in recent years, and has become a firm favourite for many.

Judith inherited Perridge Farm from her father, returning from her time in Australia to take the farm in a new, organic direction. Since then, Judith and her partner Clive have set new standards for sustainable, high-welfare farming. Their gorgeous herd of Guernsey cows get the run of the fields with stunning views across the Vale of Avalon all the way out to Glastonbury Tor. Perridge Farm has also become a haven for wildlife, and you can often see the cows roaming around with rabbits, hares and badgers, while butterflies and bees flit about.

Brown Cow Organics pride themselves on their award-winning yogurts, all made using their rich, organic Guernsey milk. A number of Great Taste Awards have been given to these creamy pots and after one spoonful, you’ll know why.

On Court Lodge Farm in Sussex, David and Marian Harding make a powerful partnership. David tends to the farm and cows, a herd of mostly British Friesians with a few Ayrshire cows too, while Marian turns their top-quality milk into delicious smoothies and yogurts. The Hardings are dedicated wildlife enthusiasts, encouraging bugs and birds to live on their land by adding in reed beds and championing organic principles. Marian and David take great pride in their role as stewards of the environment. In fact, part of their farm now forms a nature reserve rented from the Sussex Wildlife Trust, where they protect the land and the wildlife that relies on it.

Court Lodge’s top dairy pick is their famously smooth, organic Pouring Yogurt. Every bottle is full of live bacteria cultures and calcium, with a fresh, tangy taste that pairs perfectly with morning muesli and can give curries a richer, creamier consistency.

The Daioni dairy at Ffosyficer Farm, nestled in the verdant southern tip of Wales, has been a family-run business since the ‘40s. Two generations after the Harris family took over in the ‘40s, Dr Tom Harris oversaw their first bottle of organic milk, certified by the Soil Association in 1999. Ever since, it’s been success after success for Daioni, but their focus has always been on maintaining the goodness in every glass. Much of that begins with the fertile pasture where their cows graze, benefitting from nutrient-rich grass and decades of farming expertise.

In recent years, Daioni have branched out from traditional dairy offerings, supplying flavoured milk and long life milk too. They even became the first British dairy to sell organic milk in China.

So, is organic milk better than non-organic? Well, with all the good it does, enriching the natural environment and protecting animal welfare, we’d say a resounding ‘yes’. Switching your regular milk to organic helps support these hardworking dairies and sets a new standard for others to follow. Add a bottle to your next sustainable shop, here.