Vegan vs flexitarian: a meaty debate 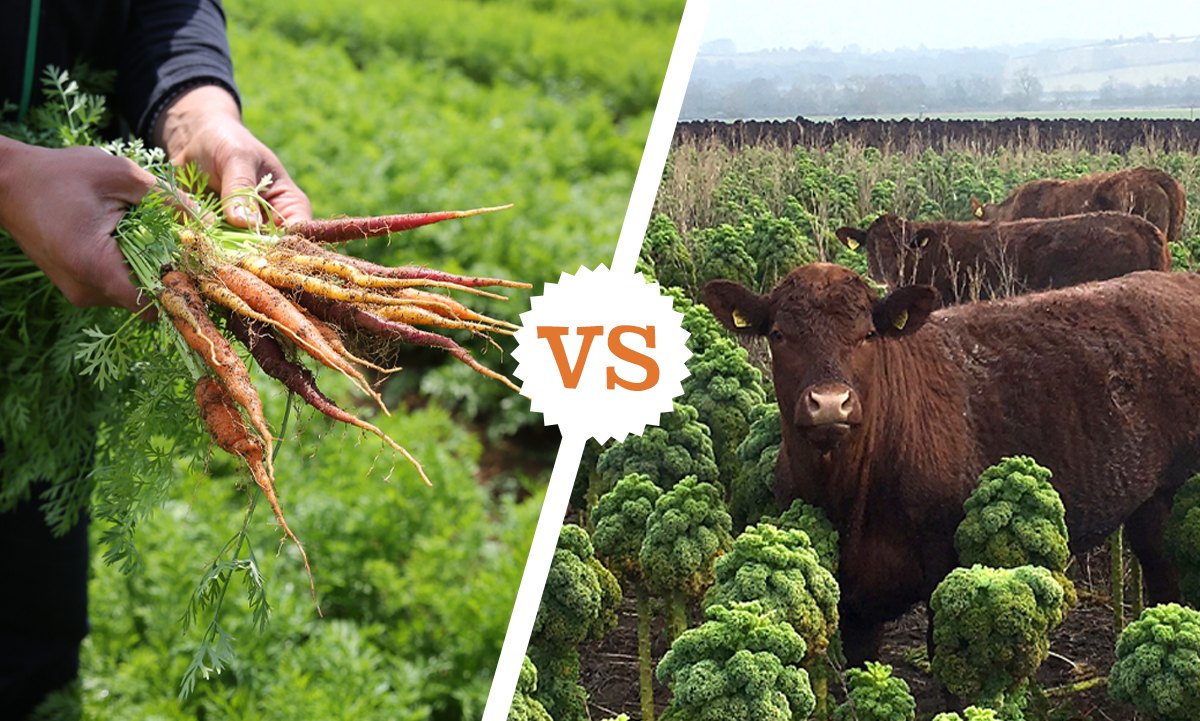 We know that eating less meat is an important part of tackling the climate crisis. But to eat some meat, or not to eat meat. That is the question. Two of Veg HQ’s writers just so happen to fall on opposite sides of this generation’s great food war, and we asked them both to set their stalls out side by side.


I’ve been a vegan for over ten years now. Yep, since even before Greggs made it cool. Back then, I put down the bacon sandwiches in the earnest belief that I was doing the world a favour. These days I’m more aware than ever that it’s no panacea for all the world’s ills.

While I know that the farming practices behind our growing appetite for soy are less than healthy, I eat and drink a lot more of the stuff than ever before. I’m not alone in that mind you. In fact, of the 3.1 million tonnes the UK imported in 2015-16, 35% was fed to livestock of one kind or another. If we were all vegan, that number would fall, and so would the incredible volumes of water required to rear livestock for meat and dairy. It becomes harder to pick a fight with soy when you look at the broader climate impact of meat; beef in particular.


Eating the modest equivalent of 1-2 beef burgers every week for a year produces, on average, 604kg of greenhouse gasses.


That’s the same as driving a petrol car for 1542 miles, heating a home for 95 days, or one return flight from London to Malaga for you budget holiday fans. By comparison, our tofu car barely gets out of the driveway. 100g of this much-maligned soy protein 1-2 times a week contributes 12kg to your carbon footprint, or a 32 mile road-trip.

Utilising precious land that would otherwise be unproductive is another compelling argument for animal agriculture. Yes, the rugged moors of Scotland won’t be growing soy beans any time soon, but as ever, there’s more to it than meets the eye. If you consider the fact that half the food that we produce worldwide goes to waste, it’s fair to assume that (in a perfect world) we wouldn’t need to wring productivity from every scrap of land. Perhaps we’d see more progress in the fight to re-wild our countryside with carbon sequestering forests if we weren’t so invested in eating grazing animals. 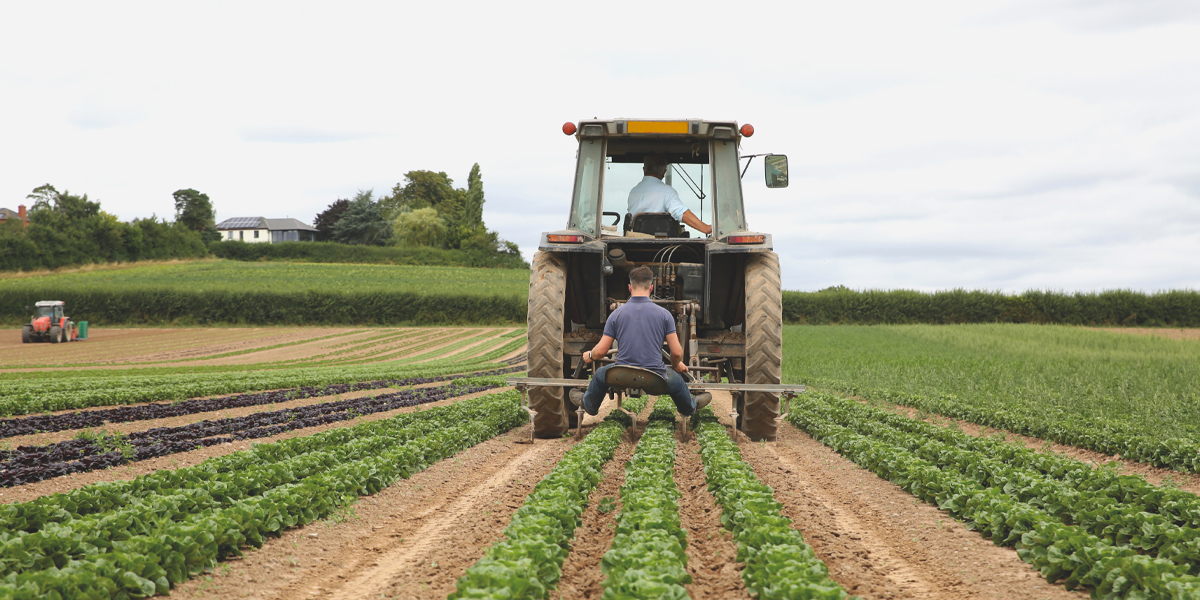 And that’s what we’re talking about here after all. The killing of sentient animals for what is essentially a luxury product in this age of plenty (for our part of the world at any rate). It’s impossible to quantify the ethical considerations of this act with figures as I’ve done elsewhere, but it’s an inescapable truth that we’re not hunter-gatherers anymore. We don’t need to kill to survive. We’re choosing to bring life into this world on an industrial scale. We then bring it to a premature end in order to satisfy not our hunger, but our tastes.

But you can’t work at Abel & Cole for as long as I have without considering organic. Not only does it stand as a symbol for responsible sourcing for plant-based alternatives, but it’s a fact that the Soil Association stipulates some of the world’s highest standards of animal welfare. It’s also a fact that, by cutting out chemical sprays, organic farmland creates a much-needed habitat for wildlife and promotes biodiversity. Where arable farming requires ploughing (damaging fragile topsoil ecosystems), animals actually contribute fertility to the land in the form of nutrient-rich manure.

Clearly it takes more than going vegan to save the world, but, if you cannot live on veg alone, organic really is the way forward.


I’m a meat-eater. Have been my whole life. And if I had a penny for every time I heard about how bad my eating habits are for the planet, well, I’d be laughing. Though some may consider me a Neanderthal for enjoying a bit of meat for dinner, ignorant I am not, so I’ve taken it upon myself to figure out whether or not my penchant for meat is, in fact, destroying the planet.

Now, I’m under no illusion that because of the gluttonous desire for meat that millions of us have in the world, football field-sized patches of the Amazon rainforest are being cleared by the minute for pasture for cattle; ‘dead zones’ are sprouting up across the globe as a result of chemical run-off into bodies of water from intensively farmed land; and a third of the world’s land is used just to grow crops to feed animals – a staggering amount of space on our planet. So, in light of all that, the automatic answer would be that yes, my fondness for eating meat is in fact destroying the planet, as I’m contributing to the above problems. But what if I were eating organic?


This is where it gets interesting… if I were eating organic, it could be argued that I’d almost be having a positive impact on the environment.


Wildlife is 50% more abundant on organic farms that produce meat and diary and grow crops. They’re places where pollinators thrive, which are the very reason much of the food we eat even exists on this planet. The soil on organic farms is wonderfully healthy, as chemical fertilisers are stringently restricted, so it stores more carbon, which helps curb global warming. And the animals are happier and healthier, being looked after under the highest standards of welfare. The routine use of antibiotics and hormone injections – common practices in intensive farming – is also absolutely prohibited. 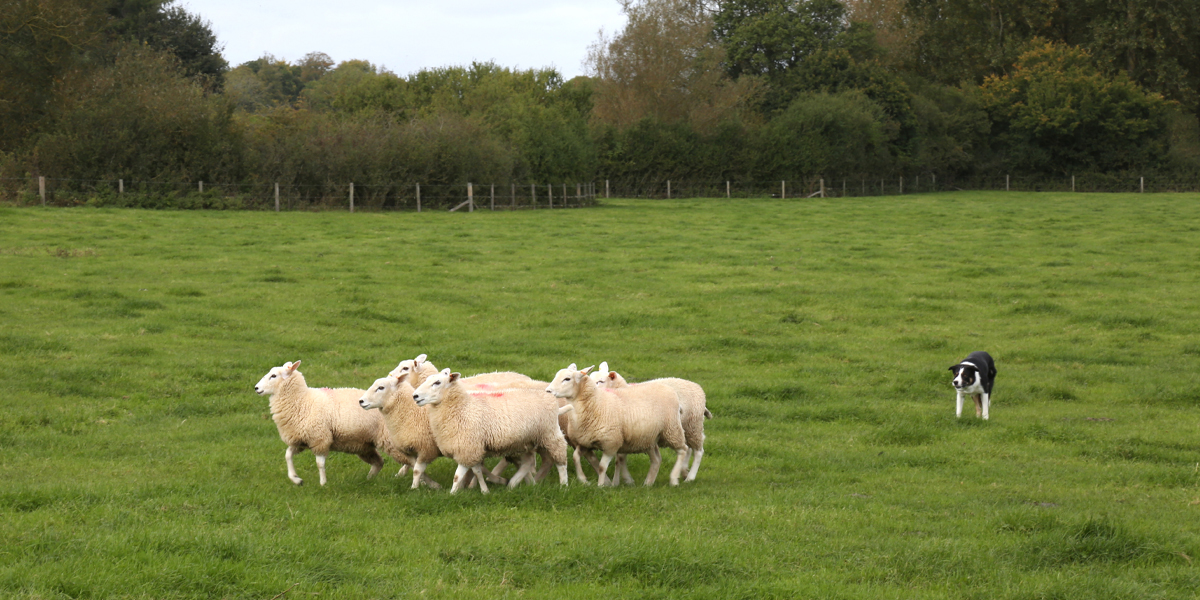 So, through that organic sirloin I’ll be cooking to a mouth-watering medium-well for steak night tonight, I’ll be supporting an organic farmer out there somewhere, who’s working with nature, and not against it. I’m eating meat the sustainable way, you could say. And if I decide to eat less of that organic meat – which I should, which we all should– then that will turn an already encouraging situation into a promising one. I’m a staunchly meat-centric person, so eating less meat overall goes against every grain in my body, but we shouldn’t underestimate the positive impact that even just one less meaty meal a week – or a completely meat-free day for that matter – can have on the future of this planet.

Eating meat gets a bad rap, and it’s no secret why. But you can make the habit more sustainable, if that meat is organic, and if you’re eating less of it. Makes sense doesn’t it? Anyway… steak awaits!


This way to sustainable vegan food

This way to high-welfare meat