Four tips for a most ethical barbecue

Ah, tis the season to gaily chuck another mushroom on the barbie. Here’s our own ethical Sherlock Claudia, with her top eco Barbecue tips. 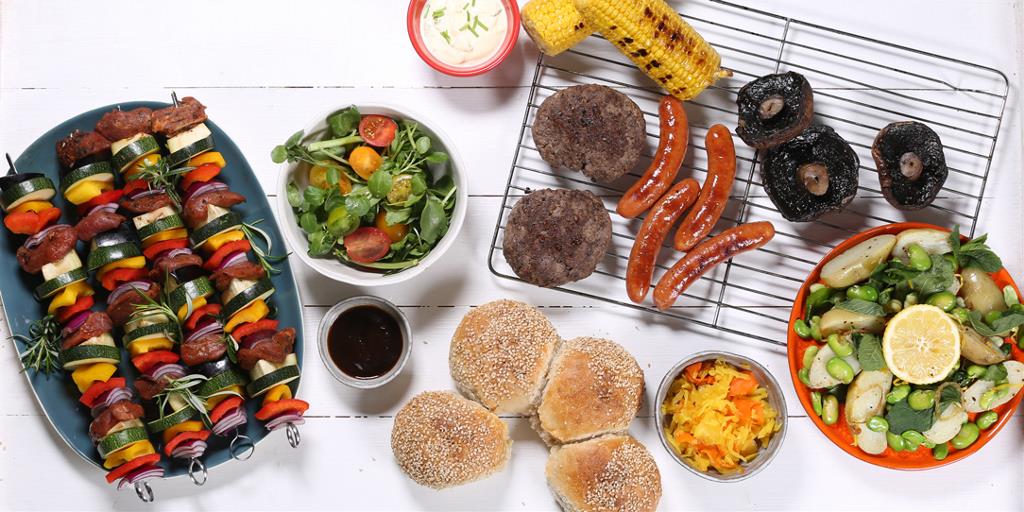 If I say ‘barbecue’ to you, what comes to mind?

It’s probably not ‘Corruption! Illegal logging! Deforestation!’ Not quite how you thought that word association would go, is it?

Turns out, as with every decision we make, even just picking up some food for a weekend barbie comes with a bevy of unforeseen consequences.

Don’t worry though, we like to walk on the sunny side and help you make the most informed choices, so you can have a positive impact on people and planet.

Did you know the UK imports around 100,000 tonnes of charcoal a year (according to UN figures)? Imported coal is cheaper, but has hidden costs.

Imports come from Nigeria, Parguay and Nambia. These regions are known for deforestation, illegal logging, corruption and poor working conditions.

No one would willingly choose to buy something that causes suffering or environmental destruction, but it’s not always possible to know where charcoal comes from as country of origin isn’t always displayed. Also, not all coal from Nambia, for example, will be produced unethically.

Rachel Kent from the Earthworm Foundation, who have been doing some fantastic research in this area says, “Most UK charcoal is imported – in 2018 the UK imported 106,000 tons of charcoal (International Trade Centre) to meet the demands of the domestic market. We’ve been analysing charcoal bags in various countries to see whether what’s stated on the packaging is actually what’s found in the bags.”

They found that the level of transparency of origin has been decreasing since 2017 (50% unknown in 2018 vs 62% unknown in 2019). They also found that in 2018 and 2019 the type of charcoal in the bags was 100% tropical/sub-tropical; meaning that it could be from areas affected by deforestation.

81% of the bags had the FSC certification on them, but the Earthworm Foundation and Greenpeace International dis-associated themselves with the FSC in 2018 due to their lack of transparency.

If you’re looking to avoid these ethical and environmental conundrums, British charcoal is a good place to start. This is the best way to be sure you’re supporting safe working conditions and a lower carbon footprint.

Our E-Co Charcoal is made in the wild tropics of Kent and Surrey, where the woodlands are sustainably managed in conjunction with the Surrey Wildlife Trust.

It is easy to light – so you can do away with those horrid petrol-smelling chemical firelighters. Just let a bit of scrunched up newspaper do the job. And it’s ready to cook on in 15 mins, it lends a great, smoky flavour to your BBQ food too (a few top chefs have been known to rave about it).

2. A meaty treat or a vegetable feast

If you’re already cutting back on meat as you read this, sunhats off to you. After eradicating food waste, reducing meat and dairy is the best thing you can do to lower your carbon footprint.

Non-organic, intensive livestock production is the pits for the planet. The environment and countless animals have been exploited in the pursuit of cheap meat. The 2011 UK National Ecosystem Assessment officially said that there has been “a loss of landscape diversity, an increase in soil erosion, reduced soil quality, and a reduction in farmland birds and pollinators, in particular” due to the increase in non-organic crop and livestock farming over the last 60 years.

Wipe your eyes, all is not lost, because good things come in brown boxes. Meat and dairy from organic farms - where the organic soil acts as a sponge for carbon and manure is composted and used to fertilise crops - is a solid choice. The added benefit is that Soil Association certified meat and dairy guarantees the highest standards of animal welfare.

Grass-fed, organic herds often graze on land that isn't suitable for growing food. And there’s at least one study that shows that eating a mostly plant based diet, with some organic, grass-fed meat on the side, is the most sustainable choice.

So, choose wisely and be picky. Treat yourself to a little organic meat, then bulk up your barbecue with piles of deliciously charred vegetables (try skewers of courgettes, peppers, red onions, tomatoes next to juicy portobello mushrooms). And try out a few meat alternatives while you’re at it!

A barbecue is a grilliant (yes, that just happened) way to try out our plethora of organic, vegan bangers and burgers. Gone are the days of glumly snacking on a bit of warm cucumber while everyone else gorges on piles of beef patties. Give our organic Tofu Grill Sausages a go and pile on the toppings. 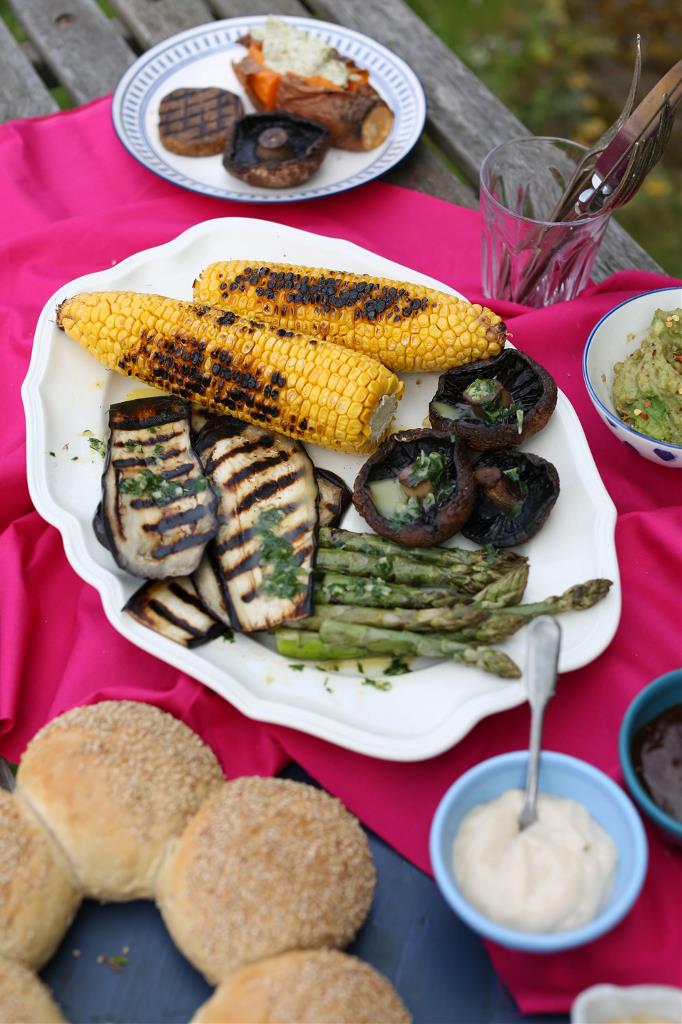 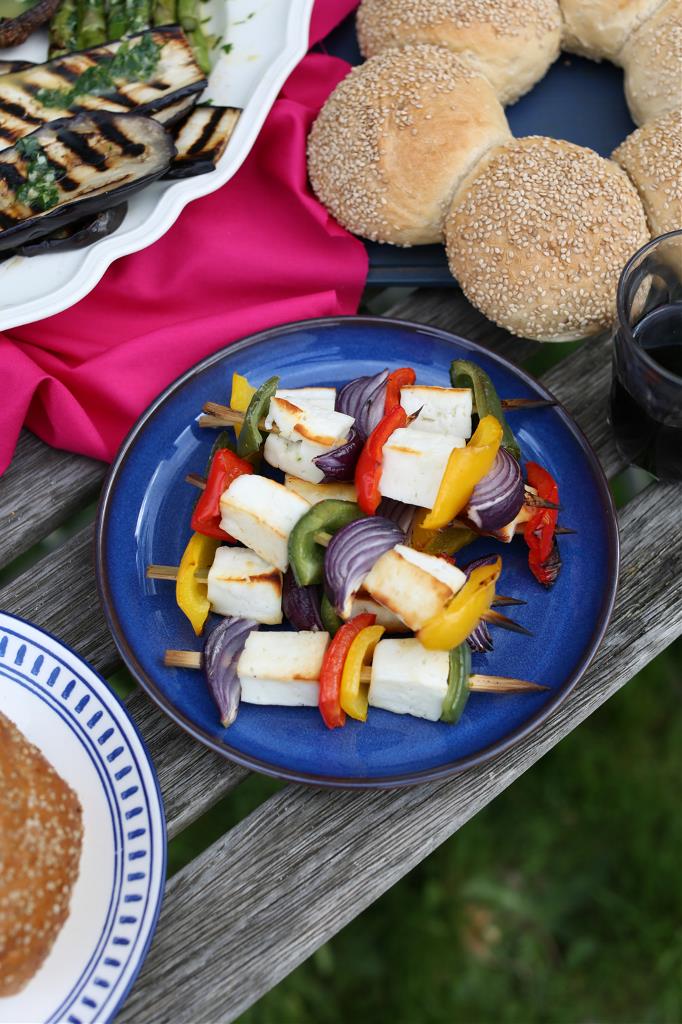 Here’s my challenge to you: if you eat meat, either try a fully vegan or veggie barbecue, OR, if the call of the drumstick is just too great, skip meat for three days leading up to your barbie. I’ll bet my bottom hotdog you’ll enjoy that organic chicken so much more.

I hope you’re sitting down. Things are about to take a turn for the radical. Many Abel & Colers will have been doing this for ever, but for the uninitiated, here we go.

It may feel weird and the odd thing might fall over, but disposable plates and stuff do absolutely no good.

Just use real crockery, cutlery and cups. or (and here’s a fun way to think about it) design your barbecue to be plate-free!

Serve salads, burgers, bangers and so on in rolls, wraps – even lettuce leaves. Have a ‘filling station’ where people can make their buns, burgers or wraps and hey presto, you just saved a bag of rubbish or washing up.

4. Tell food waste to fork off

Picture the average barbeque. How much ends up in the bin after the event? Let's be honest.

Those salads that sit out sweltering in the sun all afternoon? Unless you’ve programmed your body to build up a natural resistance to salmonella, you probably don’t want to save that stuff for supper the next day.

What's the worst that could happen? Someone goes home without having that last sausage. When someone says ’ooh go on then’ it actually means, “I'm not hungry but I don't like to see food go to waste”.

Undercater on things that spoil easily. You'll be doing your friends and the planet a favour.

Keep salads in the coolest, shadiest place possible, or even put out small amounts and keep the rest in the fridge, ready for topping up when the bowl is empty.

And there you have it. May all your barbecues from now on be deliciously ethical and better for the biosphere.