It was a typically blustery day in the north when we took to the roads to pay a visit to Dan “Organic Dan” Geity. Dan really is the man when it comes to organic veg on his acres in Ormskirk, West Lancashire. He grows all sorts of organic wonders for our boxes throughout the year, from kale to kohlrabi, parsnips to spuds...but what we’re here to see are the Brussels. 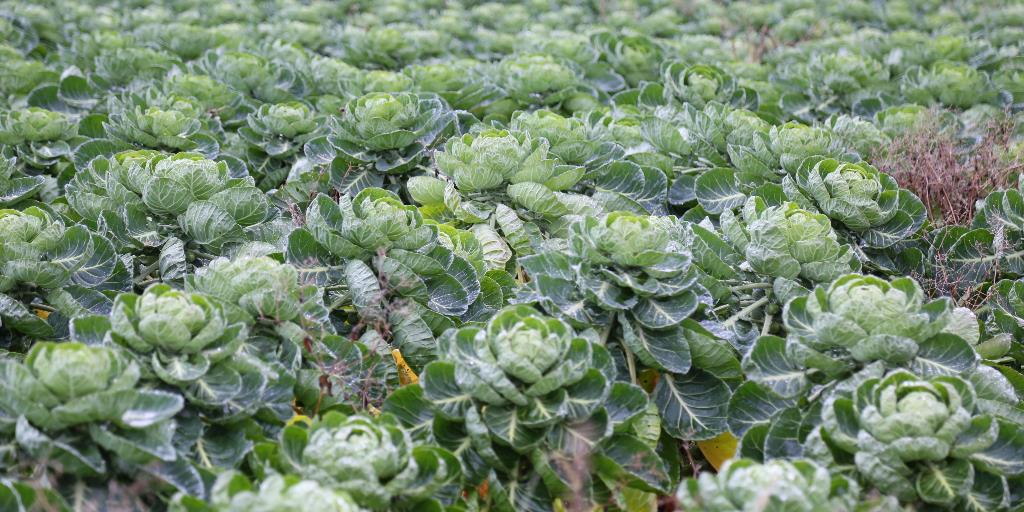 First thing's first
It’s not been ten minutes before Dan hops onto a farmer’s favourite subject: the weather (we’ll come to his second favourite subject a bit later on).“Oh, it’s been very tricky. Dry to begin with in the season and now it’s very wet so it makes it very hard to dig. We manage though.”

One look at the field and you’d think you’d sink to the bottom if you dared trod on it yet the rich, organic, sandy loam soil is surprisingly firm underfoot. We even had a go at chopping some Brussels stalks ourselves. We were handed the tools of the trade (a machete that would give Rambo a run for his money) and had a go. Dan certainly makes it look easy, mind.

A potted history
of Organic Dan
Dan's been farming since he was just a wee nipper, working for his dad as well as renting his own land to farm at night and really give it a go by himself. This was when he was just 16 and still at school. Soon after he left school Dan raised enough money to buy his first field. Suddenly there was a mortgage to pay, so he hired a tractor and helped on neighbouring farms throughout the day. This meant the only time he had to turn his field was at night.

That’s dedication for you. As a small, independent farmer, Dan was “no good for conventional farming” and couldn’t work with the “big guys”. Dan’s all about slow and steady rather than forcing his crops. “It’s a much more sustainable way to grow things,” he tells us.

Sold! To the man with the sprouts!
We did say we’d get to Dan’s second favourite subject. Our man Dan’s a bit of a collector. One look inside his shed at Home Farm and we can see he’s been busy. “We just had the shed converted last Summer with a loft to store more things.” If you ever find yourself on eBay outbid on a vintage tractor it’s pretty likely Dan’s the one that pipped you to the post. He spends his precious free time rebuilding and restoring all sorts of farming machinery from yesteryear and the collection is really something to see. “I was about to sell one of them but my daughter insisted I keep it instead,” he says with a chuckle.

Dan’s organic Brussels really are the business – they’re one of the stars of the show in our All British Christmas Day Veg Box. Nab one for the big day and you’ll have plenty to go round.